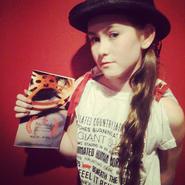 ​From a very young age, it was clear that Fiona had a passion for horror and monsters. Attending her first convention  (Rock and Shock) at just a few weeks old she had found her niche. Her earliest original horror story was created by age 2, much to the shock of her parents. By age 5, she had five more and had written her first script (with some clerical help from mom). After her 5th birthday party, she directed and starred in her first short film, Speak of the Devil. Inspired and encouraged by many people within the horror community she developed her first screenplay. Word got around and in collaboration with Wicked Bird Media, just before her 10th birthday, the short Daddy Dearest became a reality in 2015 and she fulfilled a dream by having her film chosen to make it's world premiere at Rock and Shock. Daddy Dearest has gone on to win many awards including the Outstanding Achievement award at the Shawna Shea Film Festival, Best Elemetary Student Film at the Sanford International Film Festival and the Abby Normal Award for Innovation at the Portland Horror Film Festival.

Fiona is currently developing her next project.